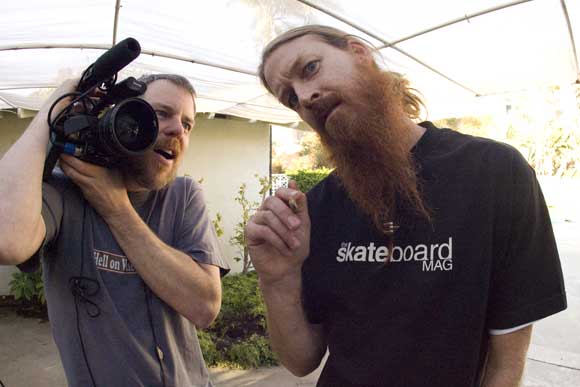 As a former skater and current snowboarder/surfer/paddle boarder, FUEL TV was made for me and has been a guilty pleasure of mine since it debuted. I’ve still got stacks of snowboarding and skate videos on VHS and would watch Lance Mountain, Tony Hawk and the crew from Bones Brigade all day long.

The programming on FUEL TV is more diverse than you’d think and their programming ranges from straight up video skate parts to athlete profiles and variety/entertainment shows.

One of the most popular shows on FUEL TV is Built To Shred and hosted by skater/builder Jeff King. Jeff is a professional skateboarder is most famous for building obstacles for skateboarding and other action sports in unusual places and out of unusual objects. Jeff has also been featured in the popular skateboarding video game, Tony Hawk’s Proving Ground which we’ve spent too many hours play than we’d care to admit. 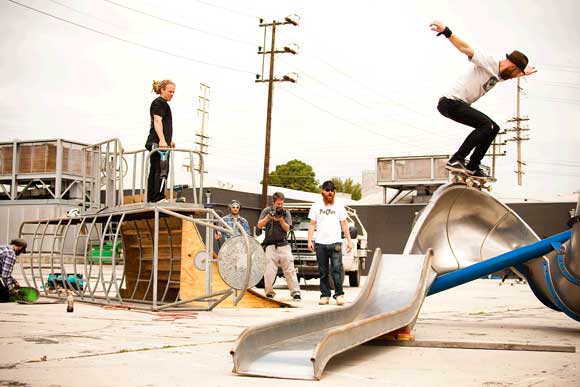 Unlike other build-it-yourself shows as seen on the traditional home networks, Built To Shred aspires to ‘architecture meets anarchy’, how can we not want to watch that!

We had an opportunity to ask Jeff a few questions about how he got into building ramps and what the new season has in store for us. Get stoked and read on!

C&H: Hi Jeff – Congrats on Season 3 of Built to Shred. You’ve definitely hit on an undiscovered niche and we love the creativity we’ve seen in the previous two seasons, especially the monster ramp you built at that ghetto skate park in Hawaii. Obviously you’ve been doing both for a long time but which came first for you, the skating or building?
Jeff King: Skateboarding. I’ve had a skateboard around for as long as I can remember but I was 14 when my dad and I built the world’s first Kingrail. It was about 10 feet long, made out of 2×6’s and 2″pvc pipe attached with nails. When you would boardslide it, pieces of your rails would get stuck under the heads. 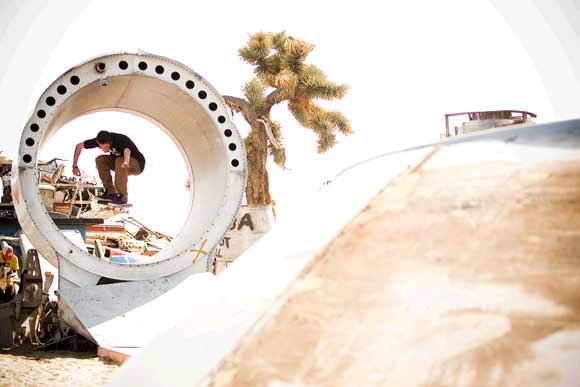 C&H: Can you give us some insight into how you approach building obstacles. Do you have a ramp in mind and then seek a location or do you go location first and look for inspiration?
Jeff King: it really depends on the situation. When we built the rock sifter ramp for Kale Sandridge in Hawaii, the location decided what the ramp was. When there is a concept, like the flat-bar bike or the shopping carts, that’s more of a shop build and take anywhere we want type of thing. Take the airplane graveyard. There’s no runways or landings anywhere so we had to build them all. In that situation we have to be a little smarter about what obstacles we want to modify. So to sum it up, it depends on if it’s a conceptual build or a location build.

C&H: I’m proud to say I designed and built a 4-foot quarter pipe when I was 11. Masonite, plywood and 2x4s was all we needed. I’m amazed when I see the mega-ramps at the X Games and can’t imagine how those are constructed and how many people are involved. What’s great about Built to Shred is that most of your projects seem attainable with the right knowledge, tools, materials and effort and hearken back to the core of skating by stripping away the need for a perfect tranny and skating on what you’ve got. Has ramp construction or materials changed in the last 20 years?
Jeff King: I can’t remember what the parks were like 20 years ago, but it depends on what ramps are in question. I don’t think backyard ramps have changed that much. Of course these days we add more flat bottom, and if you’re rich you can purchase some good top surfacing for your ramp (like skatelite or ramp armor) but people are still running masonite, which I don’t like at all. Just for the record I don’t ever think masonite should be used for a ramp. Indoor or outdoor. Aside from that it’s the same old plywood and 2×4’s.

As far as the construction is concerned, I think the pros are getting better. In a lot of the parks the coping is looking pretty good, which is an area where you can tell if the builder skates or not. If the coping sticks out too much or not enough shows who rides and who doesn’t. 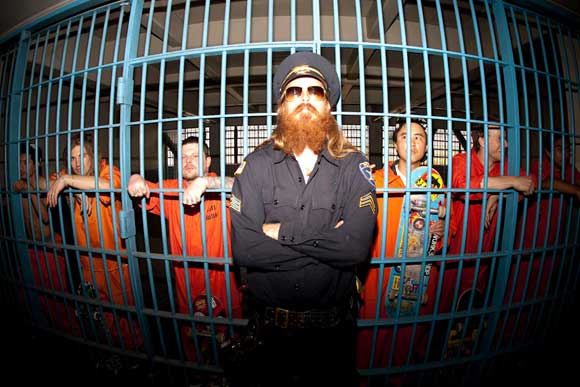 C&H: How do you balance building a ramp that can push a skater just beyond his/her abilities but not be too easy or impossible?
Jeff King: It’s difficult to do. We caught a few snags this season with some of our “never-been-done before” ramps. Sometimes the idea in the rider’s head works out better on paper than in real life. That’s one of the cool things about working on Built to Shred, you never know what’s going to happen. When Kale wanted to air out of the rock sifter and onto the rental truck we all thought it was impossible. We went ahead and set it up for him anyway, and 15 tries into it he’s spinning front flips off the truck and onto his back, made us think we pushed our luck. But it was his perseverance and will that made the trick possible. From my point of view, I am surprised all the time by the amazing ability of the riders. I’m not sure what’s impossible … aside from the Surf Rail of Death part 2.

C&H: What tools do you never leave home without when building a ramp?
Jeff King: The most important tools necessary for building a ramp are the circular saw and a drill. Everything else is just fancy. But, one of my favorite tools is a portaband–portable metal cutting bandsaw. And chainsaws. But really who am I kidding, I love all my tools, and each one is special in its own way.

C&H: Do you have any safety tips you can share that you always check a ramp or obstacle for once you’ve completed building it?
Jeff King: Keep your eyes peeled for screws sticking out. Also, ledgers are your friend. Over the years I’ve developed a strange need to stay as safe as possible when I’m working. Maybe it’s the multiple trips to the hospital to pull slivers out of my eyes or the hundred or so splinters I’ve gotten in my hands, but safety glasses are good. Gloves are also good, as well as, ear protection. And if you see anyone lock the safety guard on their circular saw, don’t copy them. Skating is way more fun when you have two eyes and all your fingers. 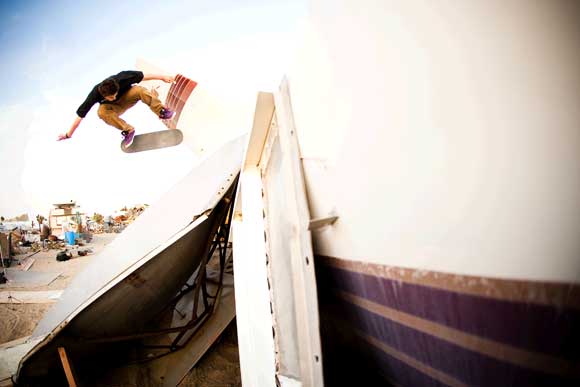 C&H: What can we look forward to seeing in Season 3 of Built to Shred?
Jeff King: This season is pretty rad. We got to hang with heads like skaters Tony Hawk and Ryan Sheckler, BMXers Gary Young and Dennis enarson, plus wakeskaters Scott Byerly and Brandon Thomas and a bunch of snow shredders. We went to the ocean, a lagoon, the snow, the desert and even the Cayman islands. And we thrashed everywhere in between!

C&H: If money and time were no object what would you build and which skater would want to see take the first run at it?
Jeff King: I can’t let too many secrets out, but I always have a good time working with Bob Burnquist and I know that between the two of us we could land a very difficult location for some serious groundbreaking action.

C&H: Any other advice for the groms reading this who don’t have access to decent skate parks and aspire to build their own ramps?
Jeff King: Get resourceful, get safe and get gnar! 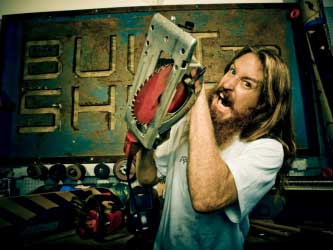 FUEL TV’s popular series Built To Shred presented by Skullcandy, makes its return Sunday, September 26, at 10:30pm ET/PT and re-air several times throughout the week. Episodes of Built To Shred are available on iTunes for $1.99. They will also be available on fuel.tv and hulu.com several weeks after they air on FUEL TV.

HGTV All American Handyman Shuts the Door on Latest Competitor 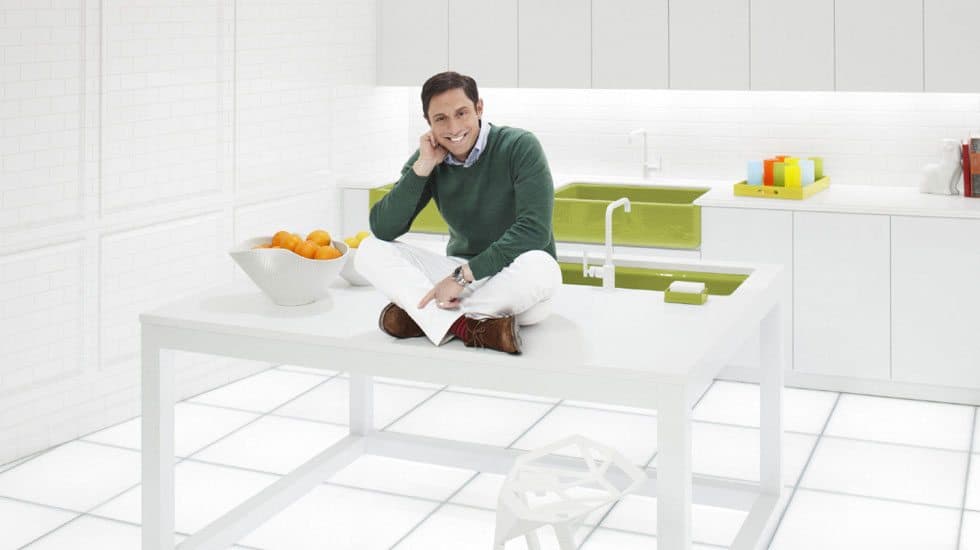 Jonathan Adler & KOHLER: A Match Made in Color