Last week, I had the great fortune of traveling to New York City for the debut of Lowe’s expanded Kobalt Tools line. Although the home improvement giant has offered Kobalt tools for years (Kobalt started in 1998 as a brand of mechanics tools), the line has now been expanded to include a variety of professional-grade cordless tools, designed to give users a more efficient and effective work experience. 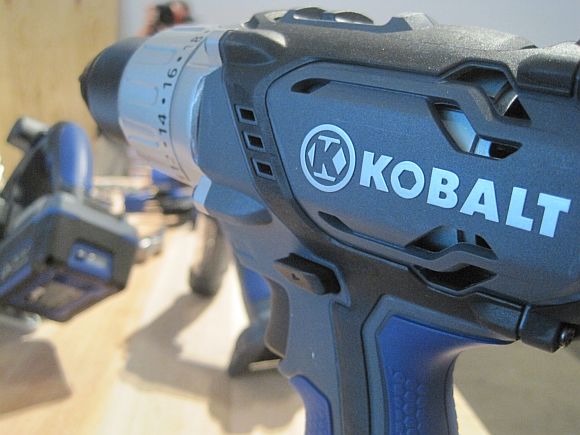 One of the coolest parts about the event (besides seeing the tools and catching up with old friends, of course!) was getting to test the tools during a building competition. We split into teams of 5 and were instructed to build what everyone at the event called a “cornhole” but I know as a “bean bag toss.”” (Anyone else out there call them bean bag tosses? Or is it just me?)
Each team had to build two sets, and I’m proud to say that our team came in second place! But I digress – back to the tools!

You can’t go wrong with anything you purchase from the Kobalt tools line, but I was impressed by the kits. If you’re looking to pick up several pieces at once, the kits are a great investment (and, psst, the holidays are around the corner, in case you’re looking for an awesome gift idea!)

Consider the Kobalt 18-Volt NiCd Cordless Combo Kit, for example. For $169 you get a drill/driver, reciprocating saw, circular saw, pivoting worklight, 2 NiCd batteries, a NiCd charger, a 6-inch bi-metal recip saw blade, a 6.5″ circular saw blade, double-ended driver bit, belt hook, bit holder and a Kobalt contractor tool bag. Heck of a deal, right? You can also opt for a Lithium Ion kit, and the batteries are interchangeable between the tools in case you end up with some that are NiCd and some that are L-Ion.

Speaking of the reciprocating saw, it’s an impressive tool. During a demonstration we saw the 12-Amp Orbital Reciprocating Saw in action. The Lowe’s team pointed out that, even though the saw is cordless, it still packs a heck of a punch and can easily cut through 3/8-inch metal pipe, among other materials, making it ideal for heavy-duty applications. Plus, the saw has a 360-degree rotating head, meaning it offers flexibility in tight work areas.
All of the Kobalt cordless tools come with a live wire indicator, a safety feature that the Lowe’s team said was highly requested by the contractor focus groups that had a chance to test the tools.
According to the development team, more Kobalt cordless products are in the works, including an impact driver. The accessories line will also expand so that the line can meet a full range of buyer’s needs.
What do you think of the new Kobalt tools? And would you buy a reciprocating saw for residential DIY application?

ShetkaStone Goes From Cradle to Cradle