The Chronicles of Refinishing a Claw-Foot Tub: Finding Clementine 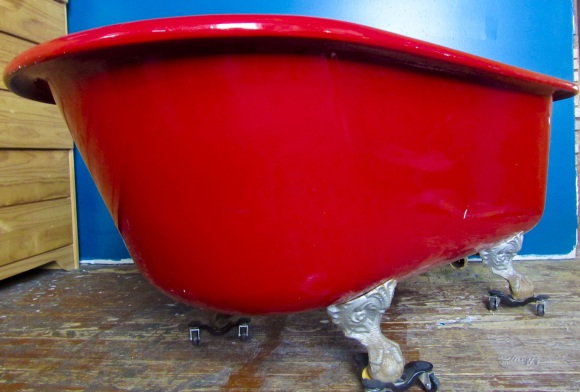 When we bought our house in 2007, we did it fully intending to renovate it from top to bottom. We looked at the modestly-sized home for its bones, and were sold on the fact that most of the major structural repairs, such as the windows, roof, plumbing, and siding had all been addressed by the previous owners within the past five years. All we had to do, it seemed, was minor modifications, and with a little bit of sweat we’d surely have an awesome place to live within a short period of time.
However, one thing we were not sold on for the house was its singular full bathroom. We knew that if we were going to spend a good amount of our lives living in our home — including expanding our family — two full restrooms would be necessary. The house had a second, oddly-placed half bathroom on the lower level, and with some creative maneuvering, it was possible to convert it fairly easily into a modest master bathroom.
But instead of just throwing in the plainest bathroom components we could find, we decided to try and honor the history of our 110-year-old home, which began the hunt for the perfect claw foot bathtub. With newly-made replica ones pricing far above our price range, we began to scour the Internet for an alternative. Our only stipulation was that it had to be long enough and deep enough to fit a full-sized adult with their legs stretched out.

We hadn’t yet moved into our home when one day, a wistful search on eBay revealed the most gorgeous antique cast-iron claw foot tub — in fire engine red, no less, with the perfect dimensions. Priced to move in Pittsburgh, this beaut was a tenth of the cost of a new tub, and just required a little elbow grease to return her to glory. We went back and forth about the practicality of purchasing such a large item online, without seeing it in person first, and the five-hour drive one way that would be required to bring it home. We were also concerned about the extent of repair required to make the tub functional — being first time DIYers we knew little of really anything, but were eager to learn.
Eventually, desire won out over reason and sure enough, one weekend was spent driving across the state of Ohio and into Pennsylvania to retrieve the tub we lovingly refer to as Clementine. She resided off-site in a family member’s garage while we worked on the house to prepare for her arrival, until this past fall when she arrived at her new forever home.
With the encouragement of another family member who has refinished her own claw foot tub, we’re about to embark on one of the most ambitious DIY projects we’ve tackled to date. Stay tuned as we share the trials, tribulations, and our hopeful success!

Save Space With The Stepcase