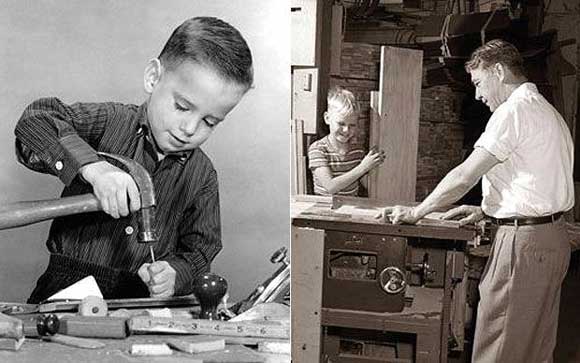 The Telegraph raises an interesting point that we continue to hear whispers of each year.
Are current 20-30 year olds less capable as do-it-yourselfers than their fathers?
One could argue the modern man has many more resources to turn to for researching (books, magazines, websites, blogs) a project as well as completing it (Ace Hardware, Home Depot, Lowes). But we also have many more specialized contractors all competing for our work and they are only a phone call or email away from fixing our household problems.

According to the Telegraph:
Author James May states that in days of yore, when men were men, they were taught by their fathers to do practical physical stuff involving spanners, saws and gearboxes. Today’s young men, by comparison, he says, are wimps.
A significant factor working against us is technology. It seems everything has a circuit or computer chip and when that goes so goes the engine or mechanical function it controlled. There was a time not long ago when auto mechanics were a grimy bunch that had permanent grease under their nails but visit a modern day dealers autoshop and many of the mechanics simply plug in the broken vehicles and the computer tells them what needs to be replaced, never fixed.
Yes, some Dads are extremely handy but some are not and just because your Dad was handy with a saw doesn’t mean you were going to take to it.
What’s your take? Are men these days lacking basic DIY skills and who’s to blame?
[via Telegraph]

Stash Valuables In A Doortop