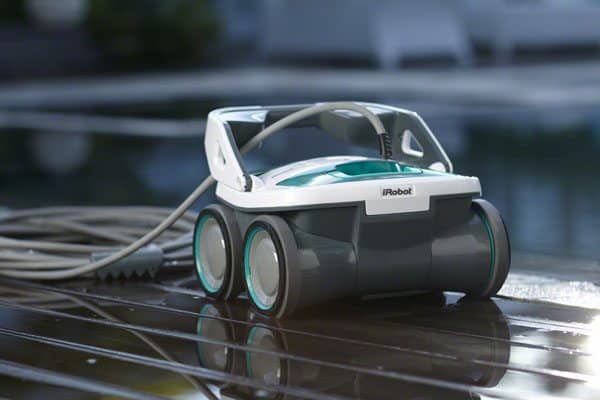 This is my first summer in our new house with an in-ground pool. While I took on the task of mastering pool chemicals I decided to outsource the time sink that is cleaning to iRobot’s Mirra. Here’s what I think.

Hits: Simple to use and a great cleaner. iRobot Mirra is self-contained with a pump and filter, so no additional booster pump or complicated hook up is required. Its built-in navigation covers the entire pool.
Misses: While easy to remove, cleaning both filter canisters completely can be difficult because debris tends to hide in nooks and crannies. The robot wasn’t as successful cleaning sand from textured pool steps.
Uses: Clean any in-ground pool that can be reached with its 60-foot, floating cord. 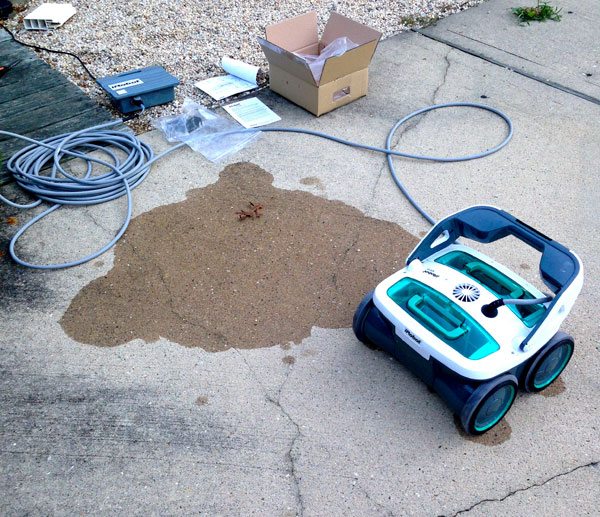 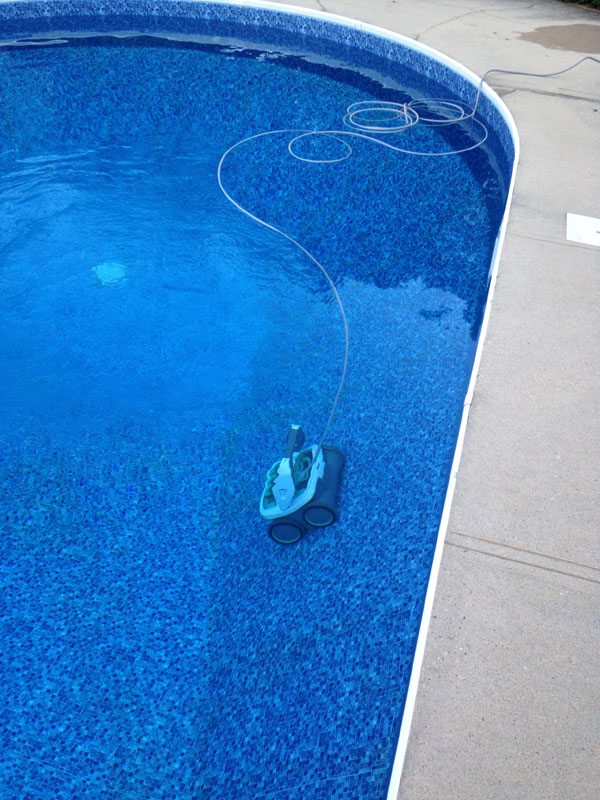 Hits: Out of the box Mirra is easy to set up, though you should plan ahead to buy a special set of rubber wheels for textured pool surface like gunite. I slid the four PVA wheels on and soaked the bot on a shallow step for 15 minutes before the first run for better grip on the vinyl liner. Meanwhile I plugged the transformer (which has the robot’s only button) into an outlet. The cable attached to Mirra plugs into the transformer. Here is my one gripe about the set up: the connection between the transformer and robot requires lining up a plug and its four pins precisely in a push and twist-to-lock movement—it’s not very intuitive. After that, there is no scheduling or programming. Push the power button and the robot is off and crawling along the pool bottom. Mirra has what iRobot calls iAdapt Nautiq Responsive Cleaning Technology, which means the robot learns the size of the pool, where it is in the pool and what spots it still has to clean. The bot filters 70 gallons of water per minute and has a rotating PVC brush underneath to clean the pool’s liner. It covers the bottom and side of the pool and the waterline where algae tends to gather. 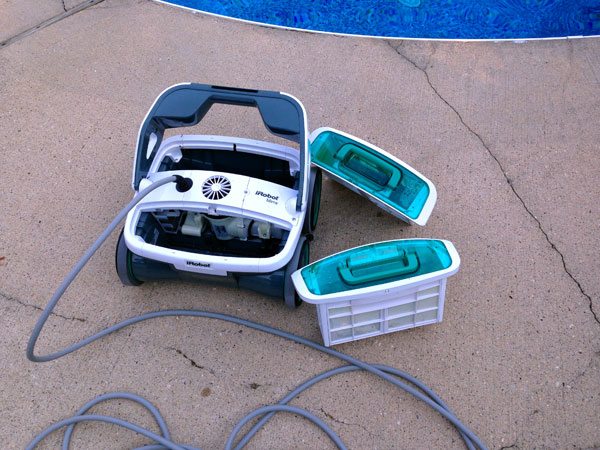 Besides the usual things that you’d find in a pool like leaves and bugs I have a French drain between my house and the pool. The pebbles covering the drain tend to migrate into the pool and stepping on one could damage the liner. To see if Mirra could sweep them up I tossed a dozen stones into different areas of the pool. After the three-hour long initial cleaning, all were caught in the filter canisters. The pool vacuum I inherited with the house required a booster pump to run and a complicated set up that required tying into one of the jets. Mirra was much easier to deal with and it caught everything from large evergreen leaves to sand. 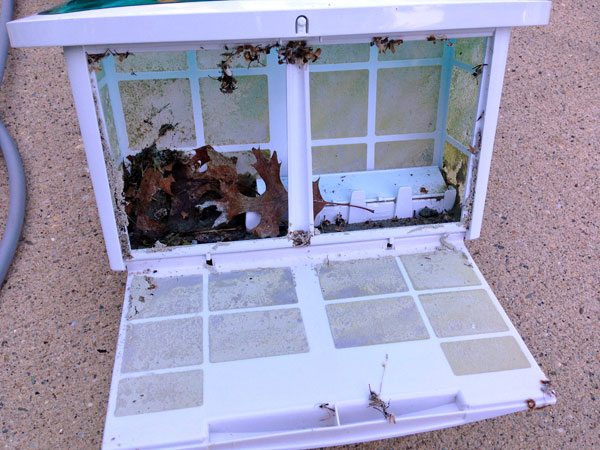 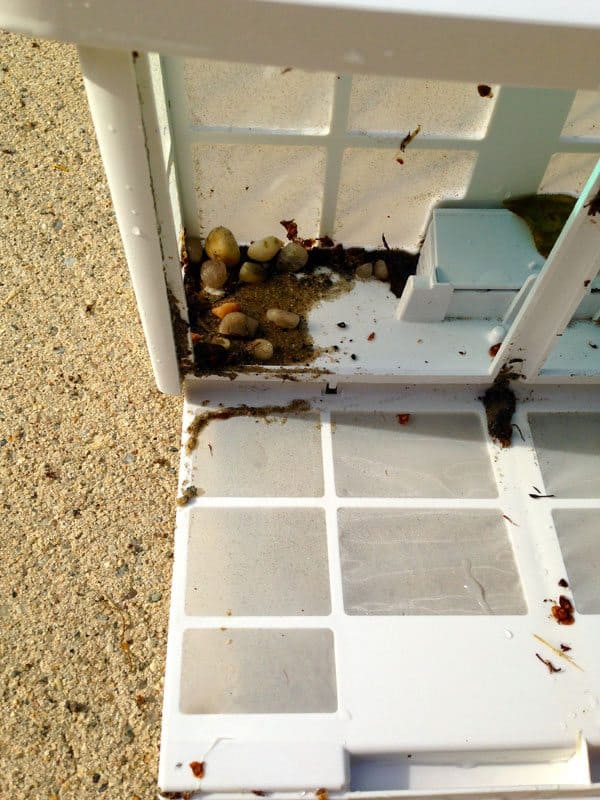 While watching Mirra climb the pool stair treads I noticed the brush underneath wasn’t rotating. iRobot explained: Mirra’s wheels are sponges and have play in them. When they are fully soaked they compress, giving traction to the robot but also ensuring the scrub brush bristles contact the pool floor. However, this doesn’t mean that the scrub brush is contacting the pool floor 100 percent of the time. If the bot is driving over a strange curve (concave or convex), or navigating stairs or a filter, there may be times that, based on the wheel design, the scrub brush does not contact the floor, though this is the minority. For the majority of the time, when Mirra is driving in a normal manner with the sponge wheels fully soaked, the scrub brush will be contacting his pool floor to scrub that surface.

Misses: About the only place the bot couldn’t clean as well were the pockets of sand that gather in the corners of the pool stair treads, which have a bumpy, anti-slip texture. There are two canisters that pull up and out of the robot for cleaning. They’re easy to remove and spray out with a hose, but the design of the plastic case leaves crevices at the top where leaves hide, making it hard to flush them out with a hose.

Final word: Don’t let the ease of use fool you, this robot has a lot going on inside. Using it as easy and it saves from hours of scrubbing algae from the walls, skimming the pool surface or diving to pick up rocks. The robot never got caught up in the floating cord. Removing Mirra from the pool requires a little effort though rubber gaskets on the bottom open to drain quickly. Mirra is $1,000 from iRobot.

Here’s a great video of the iRobot Mirra in action. 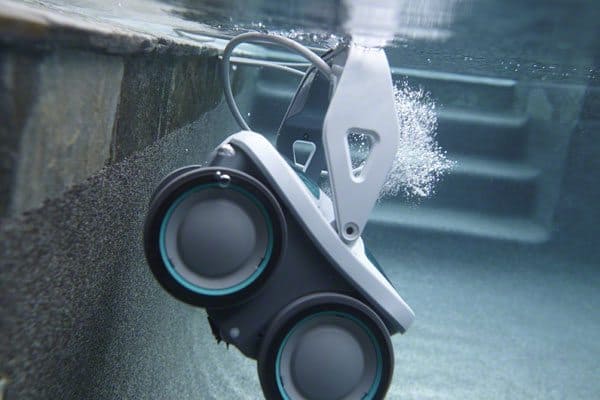 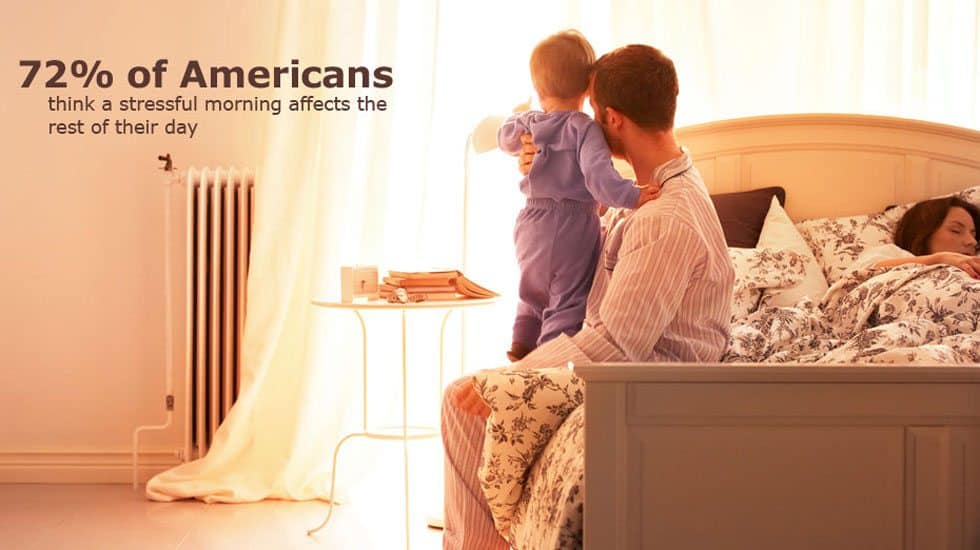 IKEA First :59 – Start Your Day in the Best Possible Way