Let There be LED Blasting Light 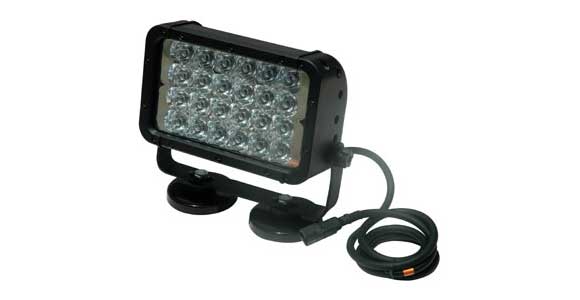 It probably doesn’t need to be said but without proper illumination you’re basically in the dark. And all portable lights aren’t ideal for all jobs. So if you need to cast a quite a bit of light consider blasting it instead. Larson Electronics has just the thing with its new high power waterproof LED blasting light with magnetic mount. This LED kit includes replaceable lens covers for blasting and coating applications, and it can be used as a base stand model or as a magnetically mounted back light for operators doing work in sand, water or other operations in non-hazardous conditions.
This model may look small but the BL24-LED 72 watt waterproof LED blasting light can deliver 4320 lumens form within a military grade cast housing. This LED blasting light further features a magnetic base and a pivoting bracket mount that enables the operator to position the LED light in nearly 360 degrees of beam angles.
Yet this is a low voltage model that is available in 120-277 Volts AC (with the DCP-11-DP inline system) or 9-42 Volts DC, drawing less than amp on 120V and 2 amps on 12 volts DC. It is rated for 50,000 life hours, and thus does not require bulb replacement.

The light kit also includes adhesive backed Mylar lens covers that protect the lens, and prevents scratching of the LED blasting lights lens and gives the operator the ability to clear the lens periodically of overspray and debris. The housing is both water and dust tight. It can be submerged to three feet without leaking.
Magnalight LED Blasting Light Official Website

What To Do If A Tornado Hits Your Home

Turn Up The Heat With A Biomass Furnace